Welcome to a new District 11 Website: https://laserdistrict11.wordpress.com  It’s been a while since the last update and this one should be a little more maintainable, work better on mobile devices and be easier to post results to.

The old website is currently directing users here and eventually laserdistrict11.org will just be a redirect to this site. (The domain will be kept, but the URL for all content going forward will be laserdistrict11.wordpress.com) 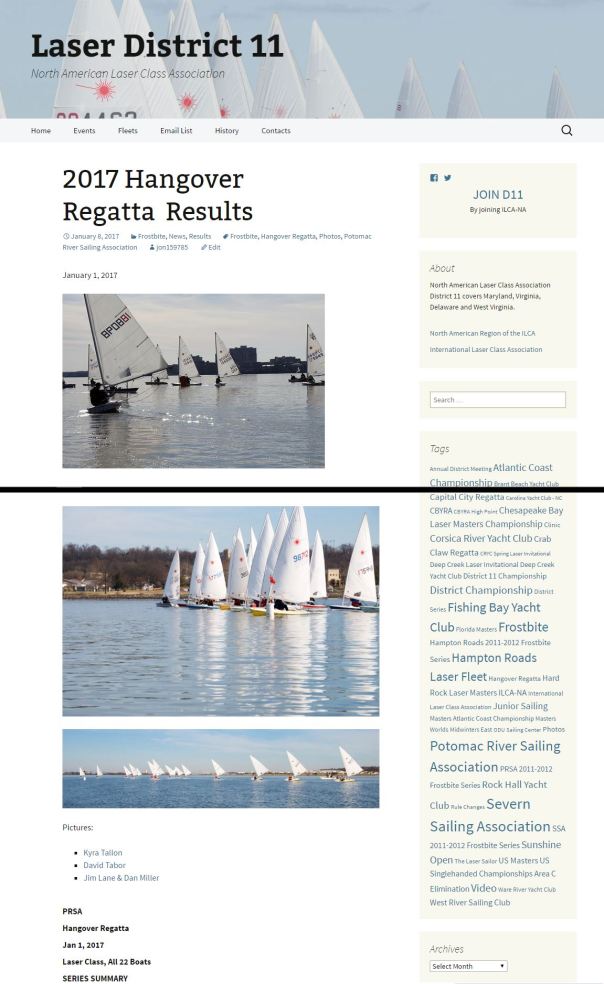 The Hampton Roads Sunfish Challenge and Distance Race has a new website.  This event will be sailed September 22 and is open to Lasers among other classes.  Check out the new website.

The Laser District 11 Website has been upgraded recently.  No major changes, but it should be working a little faster and this paves the way for more improvements in the near future.

I’ve done some major upgrades to the District 11 website.  Most of the improvements are under the covers and the general look and feel of the website remains the same. All 307 articles from the old site going back to 2005 have been converted over.  All of the NOR’s and Results remain as they were.

The new site will also enable me to make posts much more quickly rather than having to jump through all of the hoops I had to jump through before and it’ll be easier to add pictures.  I’ll be able to build on the new platform a lot more easily as I upgrade the features and eventually give the site a new look.

Finally, some of the RSS feeds have moved to new URLs.

For those that use RSS Feeds to follow websites I have updated the location of the District 11 RSS feed. In addition to news, NORs, and results, the feed also contains postings of boats for sale or wanted.

Additionally, there are now separate feeds for only news, only NOR/Results, only For Sale and Wanted.

Now is a great time to join the District 11 Email List. Be the first to find out district news, upcoming events, recent results, boats for sale and more. Sign up online now!

Check out the latest update to the district website. Same great information, updated design. This design will serve as a much better platform for future improvements.

The District 11 Homepage now features a For Sale/Wanted section. A brief listing of the items for sale or wanted is on the left side of the homepage below the recent results. There is also a link to the complete listing which can also be found here. To have something added contact JR or Jon.