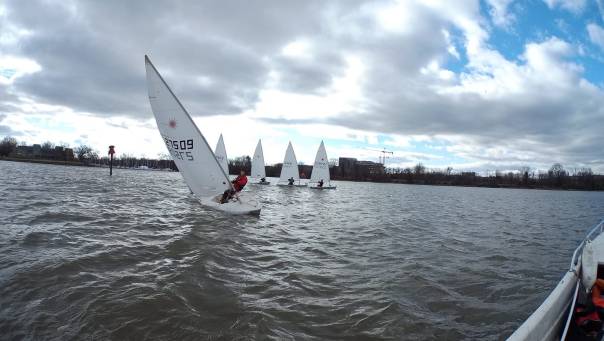 Whether you are finishing frostbiting or starting spring sailing – Potomac River Sailing Association in Washington DC has a regatta this weekend (Mar 30-31) for folks looking to get some racing in.

The registration page for the Capital City Regatta is live
http://www.regattanetwork.com/event/14293

As you know this is PRSA’s biggest Laser event of the year, so I hope everyone
can come out and enjoy two great days of racing.

If you have any other questions or suggestions please send me a note, and a
big shout-out to Nabeel and Len for their help getting things set up.

Please join us for the Capital City Laser Regatta on March 19 and 20.

Race documents and on-line registration are located on the regatta website:

Please register by March 15 to help us plan for the Saturday evening cookout. Registrations after March 15 will be charged $30 instead of $20.

Also, Washington Sailing Marina will charge a $3 / day launch fee and a $10 / night overnight fee to sailors who don’t store their boats at WSM.

Any out-of-towners who need help with lodging, please contact me.

I look forward to seeing everyone on the 19th! 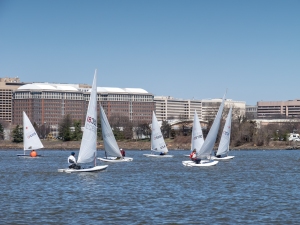 The 2015 Capital City Regatta turned out to be a fitting capstone for a crazy Laser Frostbite season. Our elder statesmen tell me that there have been seasons with more ice and wind cancellations, but that goes back a ways.

For Day One of the Capital City Regatta we simply had too much gusty wind. Several of us had tried racing in similar conditions the previous week, but there really isn�t much you can do in 30 knots with a Laser. The RC wisely raised a virtual November flag and we adjourned until Sunday.

Day Two presented a new obstacle; the overnight NW winds had emptied the water from our playground. What to do? Our fearless PRO, Chris Bolton, was not to be discouraged. He simply set a triangle-ish course in the cove and started racing. The winds oscillated from the West between 180 and 000 all day and often it blew opposite directions between one end of the cove and the other. It was funny to see Chris start the timer when a gust was coming down from Four Mile Run and then celebrate when it arrived at 90 degrees to the starting line. There was a lot of disbelief laughter on Sunday.

What did we learn from this exercise? Primarily that it�s better to be lucky than good – although there were some basics that came into play. Getting off the line with speed was important, but getting to the top mark first didn�t buy you much on Sunday – just ask Jamie. Staying aware of the wind was important, using all available resource, e.g., water, flags, boats, to detect the next puff. Positioning at the roundings was important; especially the leeward-ish marks where we saw some awesome pinwheels. Ultimately, just keep pressing to the end, it was common for places to change on the last 200 yard beat to the finish.

Finally, a standing ovation to everyone who sailed this 2014-2015 season, and congratulations to the Eric Peterson for winning the series. Our final number of participants was somewhere north of 43 people and the atmosphere and quality of sailing has never been better.

See you on the line,

Please join us for the Cap City Regatta on March 29 and 30. This will be the beginning of the season for many fair weather Laser sailors and the end of the season for our group of grizzled frostbite sailors.Please pre-register here. This will help us plan for the Saturday evening cookout.

The sailing instructions are located here. Please print a copy if you would like, since I do not plan to bring copies to the regatta.

If we have 5+ radials, we will have separate radial awards!

I look forward to seeing everyone on the 29th!

Feel free to contact me if you have questions.

The snow fell early morning leaving a nice day on the river. The wind started out of the north-northeast and clocked to the north-northwest. The wind varied from 3 mph to about 12 mph. The RC setup a windward-leeward course and ran four races.

James Jacobs sealed the regatta with two firsts in the last four races. Steve Yelland and Robert Bennett finished 2nd and 3rd respectively. Awards were given to the mid-fleet finishers Jacob Donkersloot and Scott Snyder.